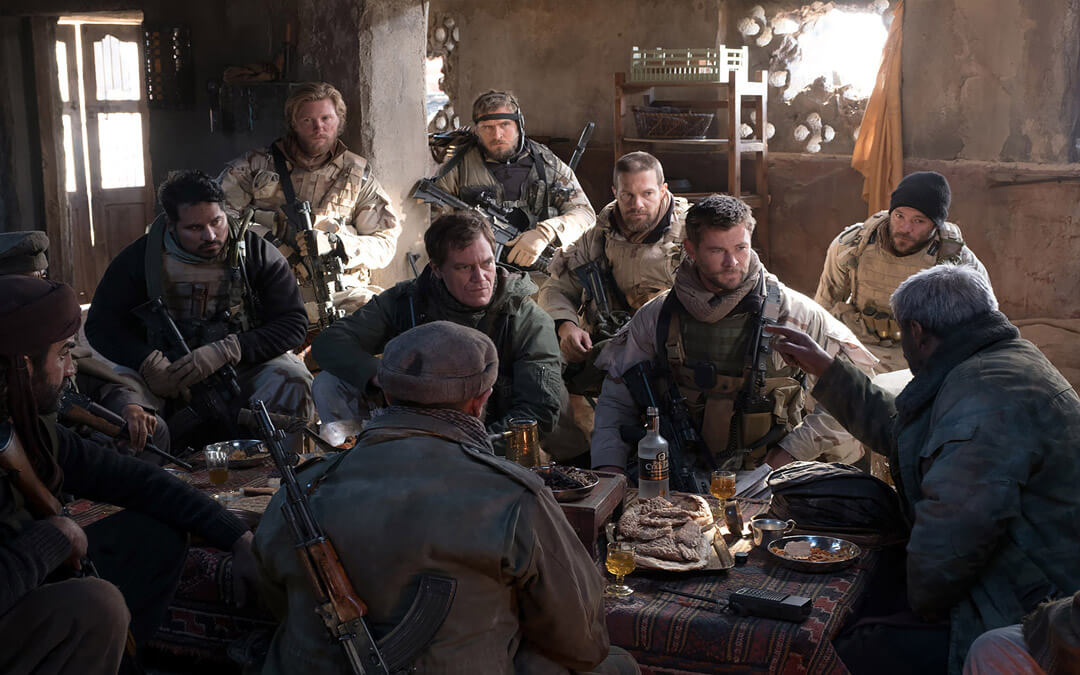 Jerry Bruckheimer is arguably one of the most successful producers in the history of film and television, with such credits as Pirates of the Caribbean, Top Gun, CSI and Armageddon, to name just a few. His latest film, 12 Strong, is the true story of a U.S. Special Forces Task Force sent to Afghanistan in the wake of 9/11, where they must join forces with an Afghan warlord to help defeat the Taliban. Written for the screen by Ted Tally and Peter Craig, the film is based on the nonfiction book 12 Strong: The Declassified True Story of the Horse Soldiers by Doug Stanton.

We spoke to Bruckheimer about the types of stories that appeal to him, what makes a good screenplay, and what advice he would give to screenwriters starting a career today.

FD: When did you first hear the story of Task Force Dagger, and what made you excited about the prospect of making it into a movie?

We got the book in galleys about eight years ago. I think Doug (Stanton) captured the verisimilitude of what went on: the fact that these guys went over there and didn’t have any accurate maps; they had $100,000 bounties on their heads, $50,000 bounties on their bloody uniforms; they had to go to Wal-Mart to buy batteries because there were no batteries for their radios; they didn’t have any cold-weather gear and had to go out and buy it; they went over there to meet a warlord and weren’t sure whether he was going to turn them over for a ransom; and if they got in trouble, they were nine hours away from any help. So it was basically a suicide mission. The fact that they got out of there alive and accomplished their mission is a fantastic story. It’s a triumph of the spirit. In reality, when 9/11 happened, Captain Nelson (played by Chris Hemsworth) was at the doctor’s office and his wife was having a sonogram, and he left his pregnant wife to go over there and maybe never see his child. That’s a great story—what these guys went through—and the book gives such a vivid description of it, and there’s such a rich backdrop to the story to dramatize.

FD: Why do you think it’s important to tell this particular story, given the current climate?

I think you have to celebrate individuals that went into something against terrible odds. Not only did they come out alive, they drove the Taliban out of Afghanistan in three weeks. But also it’s the fact that they met up with a different culture, found a way to communicate with them, win them over, and create a common goal together to liberate a country. We were not invaders; we were liberators. And in the end, we left them unfortunately, when we should have stayed and helped them. But we’re going back now to try and help sort it out.

FD: As a producer, what is it about these particular types of stories that personally appeals to you?

I like to tell stories about individuals that have made a difference in a positive way in our world, and that should be remembered. We did it with Pearl Harbor, we did it with Black Hawk Down, and we did it with Remember the Titans and Glory Road. Dangerous Minds was about a teacher who changed a school and a bunch of kids. All these people would have been forgotten. These are great stories to show that there’s hope and if you get things right, you can get things done properly.

FD: What is your process of finding stories?

They come in every possible way. We could watch a documentary and see something, we get books submitted to us all the time, we read magazine articles, we find news reports, and we have writers come in to us and pitch ideas. It comes from everywhere. We also have ideas ourselves. We think, wouldn’t it be great to tell this story? Let’s find a way into that.

FD: As a producer, what is your relationship with the screenwriter? Are you very hands-on with the crafting of the story? How do you balance that relationship?

Of course we work with them on outlines, we do treatments, we critique it, we encourage them … we work with them very closely. But they do the hard work. We don’t do the heavy lifting. They sit at their computer and actually create this. We’ll give them ideas and help them with kindly critical notes.

FD: In your opinion, what are the hallmarks of a great screenplay?

I think it’s about an interesting theme, great characters and a wonderful story. That’s what it’s all about.

FD: Further to that, what do you think makes a great character?

Depth. Conflict. How do they react in conflict? Who are they? Give them as much nuance as possible.

FD: In terms of the stories you want to tell as a producer, what are you looking for moving forward?

I wish I knew. I have no idea. You can read something and say I’d like to go see that, and that’s how I judge everything. Some days, it will pass you by and you’ll hear someone else talking about it, but so far I’ve survived.

FD: What advice would you give to writers looking to start a career, and what attributes do you think they need in order to succeed?

Hard work. The harder you work, the more you work at it, the better it gets. That’s all it is. You’ve just gotta keep at it. You have to have a lot of knowledge. You have to understand structure and character. There are so many books I can’t name them that talk about screenwriting and give you insights on how to craft a story. The old Hollywood system was much different. All their writers were on staff, so the screenplay went through four or five different writers before it got to a director. They’d hire a guy who could do a great plot, then they’d give it to a character guy for a character pass, and then they’d send it to someone else who could add humor to it. So you’ve got an amalgamation of a bunch of writers who have worked on these stories. There were writers who could do everything, but there were only a few of them. Because they were making a movie a week, they needed a lot of them. It’s different today because it’s a singular thing. You work with one writer and you work for a long time, and if that doesn’t work, you bring in somebody else. But we try to stick with our writers and bring the whole process all the way through. My success, by the way, is working with these writers. It all starts there. What’s on the page goes on the stage, and if it works on the page, it works on the stage. That’s just how it is. So the better material you get, the better writing you get, and the better the movie is. It all starts with this one guy sitting at his computer, all this stuff coming out of his mind. We just push that stuff up the hill, but if it’s not good, it keeps falling back down the hill. With better writing, it’s much easier to get it up the hill.