Home > Five Lessons Writers Can Learn From The Handmaid’s Tale

Five Lessons Writers Can Learn From The Handmaid’s Tale 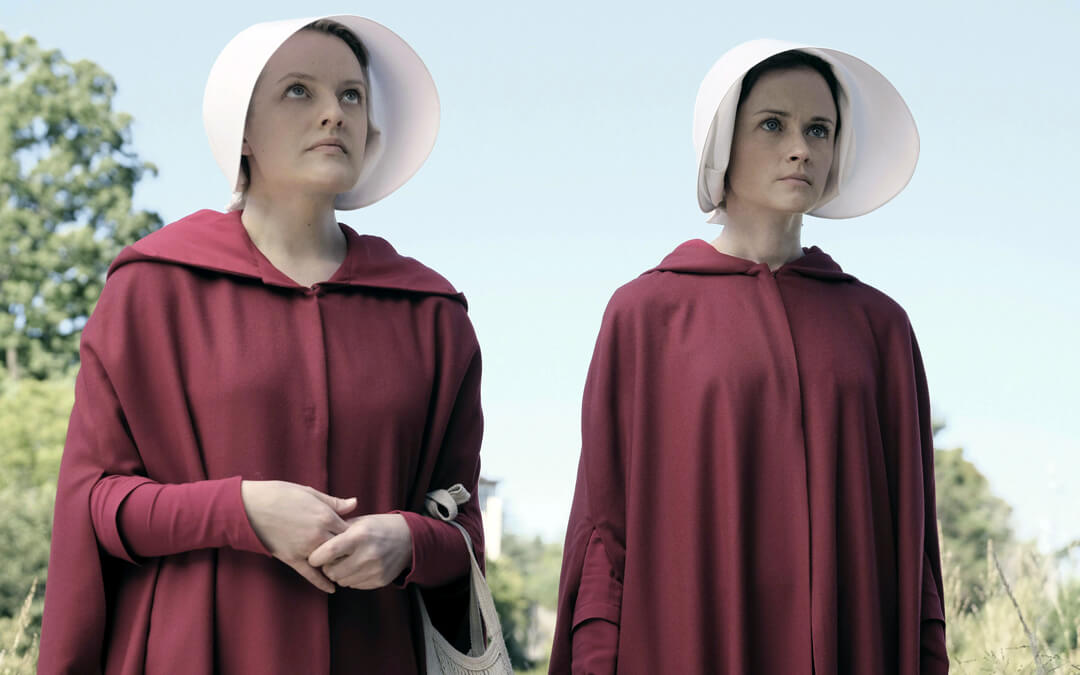 The Hulu series The Handmaid’s Tale recently swept the Emmys, winning 8 out of the 13 awards it was nominated for, including Outstanding Drama Series. Based on the 1985 novel by Margaret Atwood, The Handmaid’s Tale tells the story of a future where human fertility rates have collapsed, and extreme measures are being taken to repopulate the world. Fertile women, now referred to as “Handmaids”, are assigned to the homes of the country’s leaders, where they have one main task—to become pregnant. A haunting dystopian parable dealing with themes such as misogyny and oppression, here are five lessons all writers can learn from The Handmaid’s Tale.

1. Don’t be afraid to express your worldview.

The Handmaid’s Tale deals with difficult topics such as reproductive rights, sexism, the manipulation of power, and the dangers of religious extremism. The show doesn’t shy away from exploring these topics in great complexity, and confronts the issues head-on. If you feel strongly about something going on in the world today, don’t be afraid to explore those themes in your work. Your particular worldview is what gives you a unique voice, and will make you stand apart from the crowd.

2. Use a genre like science fiction to explore real-world themes and ideas.

Science and Dystopian fiction has long been an effective way for writers to explore political ideas. These “future worlds” can show the consequences of mankind’s actions, acting as cautionary tales while also being entertaining because they are set in a world we haven’t seen before. If you want to write about real-life themes that you are , consider setting it in a future world as opposed to the one we live in today. It will give your story a fresh perspective and make it more intriguing to an audience.

3. Make your world familiar enough to be uncomfortable.

The Handmaid’s Tale is set in Gilead, which was once America before being overrun by a new political regime. One of the aspects of the show that makes it so frightening is that the world of Gilead looks so similar to our own. The Handmaid’s Tale also employs flashbacks to show how Gilead came to be, illustrating how easy it is for a country to be overrun by political forces beyond the people’s control. By keeping the world of Gilead close to the world we know today, the show resonates with audiences to a greater extent than if Gilead had seemed completely alien. It makes the audience feel that this could happen to us, making for a more unsettling viewing experience.

4. Give your characters moments of triumph.

The world presented in The Handmaid’s Tale is unremittingly bleak and filled with despair. Yet, it is not without its moments of triumph. The Handmaids often better their “employers” and fight back against oppression, such as when the Handmaids refuse to stone one of their own to death, or when Ofglen (Alexis Bledel) briefly steals a car. While it is important to challenge your characters, it is also equally important to allow them moments of celebration. The audience needs to know that even though the world is bleak, there is still hope for a better future. It is this possibility that will keep them tuning in.

5. Use tonal shifts to ease the tension.

Similar to the above point, The Handmaid’s Tale uses moments of levity to ease the tension, and give the audience a moment to recover from the horrors of its world. Even when writing about the bleakest of events, a well-placed humorous scene can give your audience a moment of reprieve. It can also bring your audience closer to your characters, as moments of humor can be endearing. They show that your characters are fully fleshed-out and three-dimensional, making them easier to relate to.