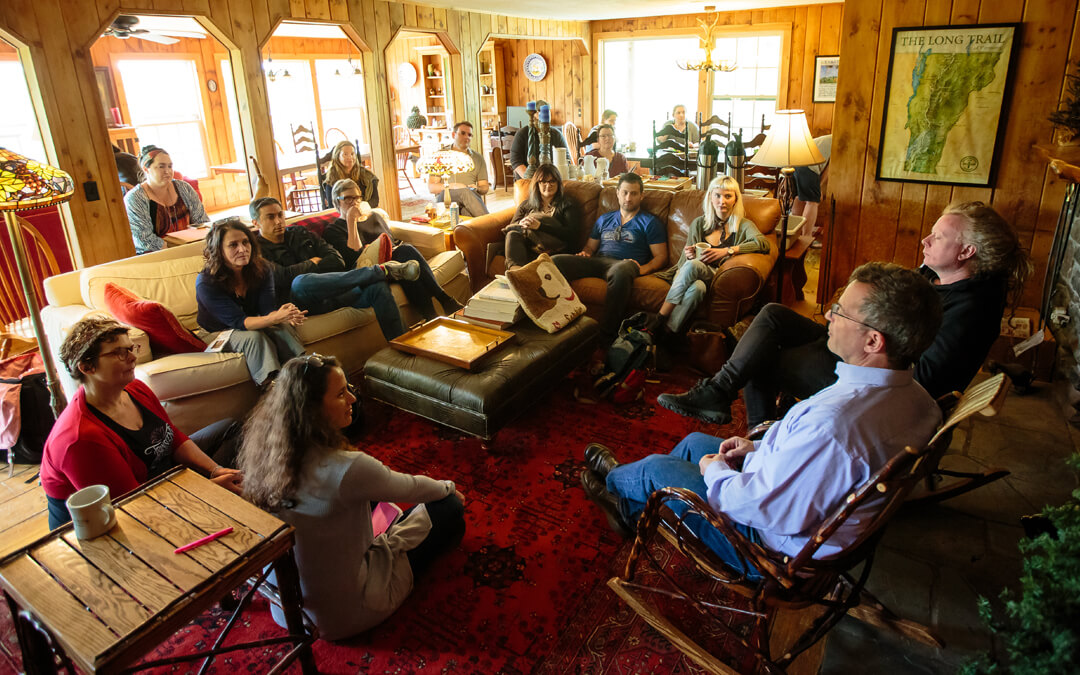 We’ve all gotten to the point in our writing where we can’t see the forest for the trees. It happens with almost every script. You’ve thoroughly outlined. You’ve worked out a solid treatment. Your roadmap is carefully planned out in colored notecards on the wall. Then somewhere in the scripting of your story—in placing the nuts and bolts—the makeup and design of your screenplay comes into question.

Without a writing partner, writing group, or strong support network, the long weeks and months spent penning a script can result in more questions than answers. It’s easy to wander off the trail you’ve set for yourself or scrap your plans altogether. As characters and their actions become clearer, maybe the structure becomes less so. There are a lot of reasons your screenplay can lose clarity and focus.

This is exactly where I found myself a little over a year ago. I was sending my script out to competitions, according to a short list recommended to me by my group of trusted filmmaker friends. The screenplay had already scored me a manager, and we both wanted to build on the success of a new rewrite with a festival placement or two.

But the script got almost universally shut out. Sure, it received a round advancement or two and some lines of handwritten feedback, but I’d found myself in a familiar place: no longer seeing the forest for the trees. I wondered what my next move would be.

Stowe looked beautiful—a small Vermont town with old farmhouses, bridges and lots of green mountains. It seemed the perfect place to unplug from the pace of the industry and get both that clarity and focus that my writing needed. A few weeks later, I was ecstatic upon learning I’d been selected but had no idea the extent to which Stowe would change my writing (both my approach and the quality).

The Fall Labs are unique amongst Fellowships. Designed by founders David Rocchio and David Pope, the idea of the Fall Labs is to really crack the structure and themes of your story. For me, this was the core of my script’s problems. I had characters I felt passionately about and scenes where they performed passionate and cinematic things … but the screenplay could be much stronger.

I can go on for quite a bit on the beauty of Stowe. It’s peaceful and about as different from L.A. and New York as you would want for an escape. I had some incredible walks to and from the Lab and got a chance to run in the trails around Stowe. It turned out to be more beautiful than the website promised.

But the real pleasure of the visit was the Lab and its design. I found myself in a very diverse group of writers from around the U.S. (and a few from other countries). The four-day Lab divides its time between lectures and Q&As with Industry Mentors and working in peer groups on repeatedly pitching your story.

The Industry Mentors are a very strong mix of storytellers, from long-working screenwriters to directors to distributors to producers. Everyone seemed selected for their incredible grasps of story and how story works on a basic level. I found the lectures on topics like structure, pathos and character motivation to be as illuminating and engaging as the feedback I received on my own work. I refer to my notes regularly for some of the breakthroughs they offered. The pitching portion of the Lab I was weary of, but it turned out to be the most valuable aspect of the process. Weren’t we here to work on our scripts? I discovered that there was no point in working on our screenplays if they had much bigger problems!

We spent several sessions a day repeating elevator pitches of our material. I was put off at first. “Elevator pitches don’t really happen,” I told myself. But through the constant repetition and feedback, my story grew clearer and stronger to me. By the end of the four days, every spare piece of fat still hanging onto my story was burned away.

I know my story much, much clearer. The diversity in both peers and mentors gave me a wealth of feedback from which I could restructure my film. I no longer could ignore problematic story points or unclear characters. Even better, I knew the parts and ideas that got audiences excited (and, in turn, myself). I didn’t just learn what to cut; I knew where to go with my rewrite.

I left the Stowe Story Labs last Fall re-energized about my script and incredibly focused. What’s more, I hoped that I would be among the smaller group invited back in the Spring for the Stowe Story Retreat where our fully rewritten scripts would be given the same fine-toothed treatment as our story structures. Thanks to the PAGE Awards, I had attended the Labs for free but I realized upon leaving that I would gladly pay the cost for the access to my peers, mentors and beautiful Stowe again.

Luckily, I was invited back for the May Retreat and had a chance to make good on this. Now focused solely on the completed script, the Retreat was a chance for me to take my writing even further. Looking back on my time in the forest and the trees of Stowe, I can’t recommend the Labs and Retreat enough. My time spent there has made me a stronger and more focused writer, and I welcome my next chance to return.

Final Draft is a proud supporter of the Stowe Story Labs. To learn more about the fellowships, click here!

Jonathan London is a writer, director and producer whose credits span feature films, documentaries, TV, video games and comic books. He is also the host of the long running Geekscape podcast, available weekly. You can follow Jonathan on Twitter @jonathanlondon, on Instagram @GeekScapeDotNet and find his work on Vimeo.