Home > The Writing of Wonder Woman

The Writing of Wonder Woman 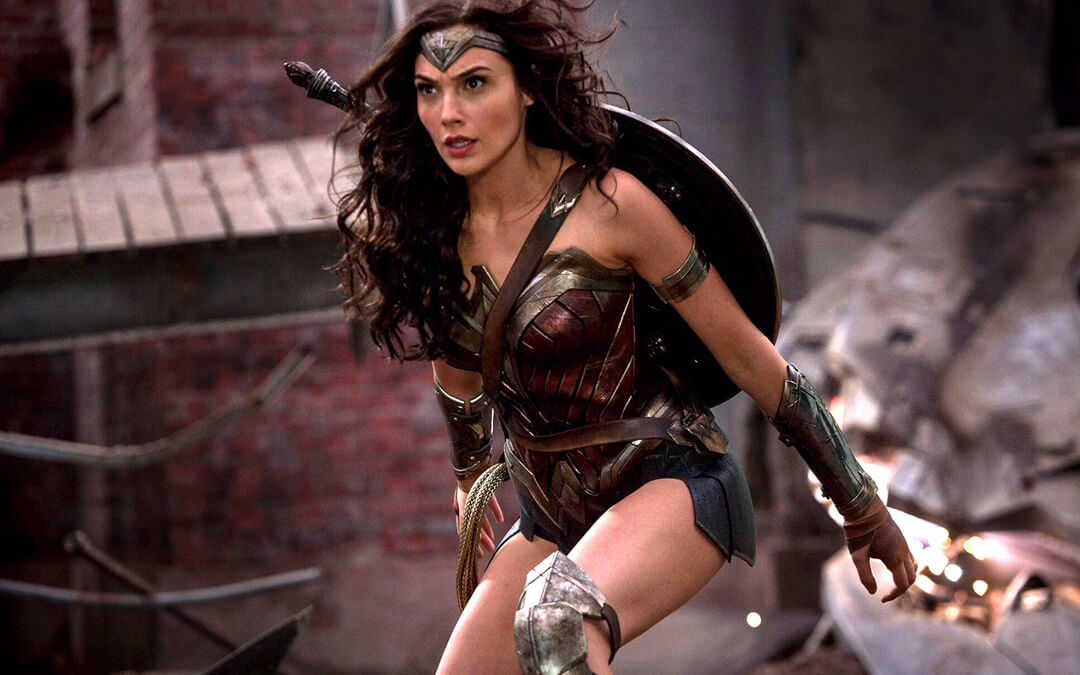 Beautiful as Aphrodite, wise as Athena . . . With such accolades describing Wonder Woman on everything from T-shirts to coffee cups, it’s no wonder that fashioning a story about her seemed as intimidating as scaling Mount Olympus.

Yet screenwriter Allan Heinberg and the creative team behind the new Wonder Woman film have won over audiences and critics alike – the film holds a 93 percent “fresh” score on RottenTomatoes.com – by focusing on what’s made this character such a beloved icon for 76 years. They found the just the right tone to balance her relatable attributes: sincerity, openness, strength, and heart.

The proper tone in any story is key. With fantasy stories of superheroes, secret agents (James Bond), or clashes of magic in mystical lands (the Harry Potter stories, Game of Thrones), the risks are many because of the spectacular extras: colorful costumes, phenomenal powers, flashy cars, unique gadgets, unusual creatures, and an epic scale. These stories have a huge capacity to work on an allegorical level (The Dark Knight, Captain America: The Winter Soldier or Civil War), even as they’re rousingly entertaining. (Kit Harrington, who plays the reluctant resurrected hero Jon Snow in HBO’s Thrones, for instance, says in the June/July issue of Esquire that Jon is perhaps best fit to rule the Seven Kingdoms because he’s never aimed for that while other “people who really desire power are the people who shouldn’t have it.” http://www.esquire.com/entertainment/a55226/kit-harington-after-game-of-thrones/)

Yet hit the serious beats too hard, and you wind up with 2013’s Man of Steel, which cast a fine Henry Cavill as Superman but went dark, turning a bright, hopeful hero into a strongman OK with killing. (“Superman is supposed to be the best of us, because he believes in the best of us,” noted Marc Bernardin in The Los Angeles Times. http://www.latimes.com/entertainment/movies/la-et-mn-batman-v-superman-too-dark-20160328-story.html). Push too far in the other direction, and the result turns campy—fine for The Tick, the blue-suited superhero spoof currently on Amazon.com that Vanity Fair likens to Don Quixote http://www.vanityfair.com/hollywood/2016/08/the-tick-amazon-pilot, but disastrous for Catwoman, the 2004 film starring Halle Berry that few behind the scenes seemed to know what to do with.

As a protagonist, Wonder Woman has often been tricky. Created in 1941 by William Moulton Marston, inventor of the polygraph machine (shades of her Lasso of Truth) and modeled after suffragettes and centerfolds (http://www.npr.org/2014/10/27/359078315/the-man-behind-wonder-woman-was-inspired-by-both-suffragists-and-centerfolds), she had the look of a wartime pinup wrapped in Greek mythology. Ms. magazine touted her as a feminist icon in the 1970s, and a generation watched and adored Lynda Carter on TV as the hero, spinning to transform into her alter ego. (I dressed as Wonder Woman in my kindergarten Halloween parade and, yep, twirled around the house to battle bad guys.)

The feature film starring Gal Gadot is the culmination of a long road of screenwriters, plot iterations, and other behind-the-scenes talent. Although Heinberg has the sole screenwriting credit, producer Zach Snyder (director of the upcoming Justice League) and Jason Fuchs (screenwriter of Pan) shaped the story, as did producer and DC Comics chief creative officer Geoff Johns and director Patty Jenkins. They all found inspiration in 1978’s Superman starring Christopher Reeve as a genuinely compassionate character with a strong desire to be a hero, producer Charles Roven has said. http://collider.com/wonder-woman-script-changes-writers-charles-roven/#patty-jenkins

They also have a love and sincerity toward Wonder Woman herself, born (or created, depending on the origin story) as Diana of Themyscira, an idyllic island of Amazons intended as a counterpoint to our flawed world. Heinberg has said she’s one of his favorite characters, tweeting about how hers was the first comic he received 43 years ago. https://twitter.com/allanheinberg/status/870146033811996672 Although he’s worked as a writer and producer on TV series such as Party of Five, Sex and the City, The O.C., Grey’s Anatomy, and The Catch, he’s also written for several Marvel and DC Comics titles, including Young Avengers and Wonder Woman.

“We were trying to tap into what her essence is, and what makes her so important for so many years,” Heinberg has said. “It was really getting down into her life and into her psychology.” https://www.newsarama.com/34662-wonder-woman-filmmakers-key-in-on-magic-essence-at-l-a-premiere-s-red-carpet.html

Jenkins adores her, too. She’s gamely answered fans’ questions on Twitter about her favorite Wonder Woman storylines in the comics and has talked about how making this film is a dream come true.

Diana is a fierce warrior, but she has loads of empathy. She’d probably get along well with Marvel’s Captain America, whose decency and hope for humanity took root in another age before he landed in the modern world. Just as Steve Rogers (played beautifully by Chris Evans in the Marvel films) volunteers for the wartime experiment that grants him super strength because he genuinely wants to do his part for his country, Diana also wants to serve. She opts to leave paradise because she can’t bear the thought of not helping others during the “War to End All Wars.” The film smartly transplants her emergence in modern times during World War I instead of World War II, finding greater storytelling potential in the first mechanized weapons and the attitudes toward women at the time.

Diana’s heroism is selfless, but the character also has an adventurous curiosity. Heinberg has said he imagined her a bit like Ariel in The Little Mermaid, wanting to “be where the people are” instead of isolated on Themyscira. http://ew.com/movies/2017/05/19/wonder-woman-writer-little-mermaid-influence/ (Interestingly, his story arc in the comic storyline Wonder Woman: Who Is Wonder Woman? also wrestles with Diana’s feelings of being an outsider among the humans she loves so much.)

Jenkins has said she also liked the comedic potential of seeing Diana as a fish out of water. Not all those jokes have landed; some writers groaned over Chris Pine’s Steve Trevor mansplaining things to Diana like Edwardian-era clothing and snow http://www.westword.com/film/wonder-woman-emerges-to-save-the-world-but-risks-losing-herself-9106006. (I could have done without her trying to walk through a revolving door with her shield and sword.) But Gadot’s underlying intelligence and confidence are charming, with reviewers likening her innocence to that of Madison, the mermaid who steps into New York City in 1984’s Splash.

Gadot has described the film as a coming-of-age story. Her Diana doesn’t assert herself by putting down men (something the 2009 animated film Wonder Woman does in parts) but instead plays to equality. “For me, it was very important that we didn’t portray this character as a ball buster or as a cold woman just because she is so strong,” Gadot has said. http://emanuellevy.com/review/featured-review/wonder-woman-interview-with-star-gal-gadot/

Earnestness and idealism can be tough to write without questioning whether your character is boring. But if that’s the truth at the core of your character, you can honor that sincerity while exploring it in satisfying ways. Stephen McFeely and Christopher Markus, the screenwriters of Marvel’s Captain America films, have said they like to play Cap’s innate goodness and 1940s worldview against modern-day grayness and compromise. “I don’t think he questions what he believes, but I think he questions whether anybody else does anymore,” Markus has said. http://www.slashfilm.com/interview-stephen-mcfeely-christopher-markus-captain-america-winter-soldier/

With Wonder Woman, Gadot has said that Diana’s idealism helped create a well-rounded character. “She thinks the world is super simple. Just by being that, she is already vulnerable, because she doesn’t understand the complexities of life,” she’s said. http://emanuellevy.com/review/featured-review/wonder-woman-interview-with-star-gal-gadot/ “But I don’t see vulnerable necessarily as a weakness. She is who she is, and she can [be] vulnerable too. That gives her a lot of leverage in different situations.” Critics also have loved how the character’s optimism and Steve Trevor’s cynicism change each other for the better. http://collider.com/wonder-woman-review/#gal-gadot

Next time you plot out on a fantastical story, forget all the sparkly trappings for a moment and look at the character’s core as a guide for the tone you should have. You might find that the easiest way to relate a fantastical story is to hone in on what brings your character down to earth.