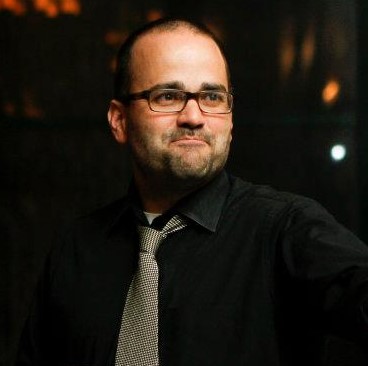 NFL media specialist Joseph Greenberg has always been an aspiring screenwriter on the side. But given how Twentieth Century Fox just dropped six-figures on his spec script Man Alive, things are changing for the 39 year-old New Jersey native.

In this dystopian tale, aliens have taken over the minds of Earth’s inhabitants–all except for the protagonist (aptly named “Man”), who is oddly immune to the alien assimilation tactics, and must live amongst them in a perpetual stalemate.

Greenberg submitted scripts to the Final Draft Big Break Screenplay Contest on several prior occasions, and his persistence paid off in 2014, when Man Alive won the Science-Fiction/Fantasy category, triggering a storm of requests from literary agents and managers wanting to read Greenberg’s material. The script ultimately fell into the hands of Greenberg’s now-manager, Scott Stoops. After Greenberg was whisked off to L.A. for a dizzying week of meet-and-greets with financiers and production companies, Fox spoke the loudest and purchased the property for Fargo creator Noah Hawley to helm as his feature film directorial debut.

In this first installment of a two-part interview, Greenberg spoke to Final Draft about creating the thrilling page-turner that couldn’t be denied.

First off, where to you hail from?

How did you come up with the idea for Man Alive?

It was actually a couple of different things that were swirling around in my head that coincidentally collided at just the right time. The set-up of this story is an updated take on The Invasion of the Body Snatchers. My wife and I were watching the 1978 remake starring Donald Sutherland, and there’s a scene where pod-person Jeff Goldblum and pod-person Leonard Nimoy catch up with Sutherland and shoot him with a sedative–presumably so he’ll fall asleep and they can absorb him. And my wife said, “I don’t understand. They’ve been chasing him through the whole movie, so why don’t they just kill him?” And I said, “They don’t want to just kill him, they want to absorb him.” And the next thing that popped into my head was, “What if there was someone in that universe who couldn’t be absorbed, who just woke up the same every day?” The realization that he has to live in this world is where Man Alive starts, long after the alien invasion began.

The character of Man has a robust knowledge of weaponry. Tell me about the inspiration for his character.

The character of Man is based on a friend of mine, who went to Iraq for 18 months, and was in combat in Fallujah and some really bad places. He was there for the surge and was awarded a couple of medals. But when he came home, he was able to pick up where he left off and he now works for the Secret Service. And I remember going to his coming-home party in Georgia, and asking him about what it was like over here, and he said he just wanted to get home to his family and be happy and healthy, and he did that. This guy could be the poster child for the military. “Hey, come serve in the military and then when you come home, great things will await you!” We’ve all seen films where the soldier comes back from war and can’t let go of that battlefield and has trouble readjusting. American Sniper is a perfect example. But I was interested in telling a story that was inverted, where a guy comes home and is totally fine, but there’s been some sort of first-order change at home, which is quite literally not the place he left anymore. So the character is loosely modeled after my friend’s experiences, and my idea to put a character like that in an off-the-wall situation, to see how it evolved.

The epic battle scene, where Man mounts a military-style forced retreat defense against the aliens, seems like it will require a lot of choreography, explosions and other moving parts. Did you contemplate the logistical complexities and budgetary considerations of shooting this scene when you wrote it, or did you let your mind run wild?

To put it in a boxing term, you have to just let your hands go, meaning you have to write everything down without over-analyzing it. I never stopped and said to myself, “This is way too big and it’s not going to sell.” Maybe going forward, it would be different if I picked up an open writing assignment where I knew what the budget would be. But if I’m just writing something on spec, out of my head, I don’t consider those things at all, because you’re ideally fleshing out a character that you’re following through the story, and you want them to go wherever they need to go, and second guessing yourself would restrict your imagination. It’s not really so much about budgetary concerns; it’s more about content. I had to let go and follow the story how I saw it, because I didn’t think anyone would respond to the violence in the script. I mean, in the first five minutes, Man walks into a food court with an axe and starts hacking people up, so I thought anyone reading this would think I should be committed. But I had a graduate school writing professor who would say, “You have to write like your parents are dead.” Because most people self censor their voices when they’re writing something that’s extreme or visceral, because they think, “What will mom and dad say when they read this?” That’s the voice I had to let go of, to let my creative voice come out.

How did the Final Draft Big Break Screenwriting Contest come onto your radar screen?

I’ve always used Final Draft software, going back a few years, now. And I don’t live in California; I live in Southern New Jersey, and even though I can get to New York, it’s not really a commutable distance, so I’m not in a film town and I’m not in an industry sphere, so it was just a matter of, “I want to be a writer/director, how do you do that?” From the director point-of-view, you need to keep making short films and try to get them noticed in short film festivals, which I’ve done, but there are also writing competitions, and every year I wanted to make a submission to the top contests, so I constantly did searches for, “What are the top ten screenwriting contests”, and Big Break was always on that list. I entered for two or three consecutive years, and submitted Man Alive to the 2014 competition, and then I kept getting alerts that it was moving up–past the quarter-final round, past the semi-final round, then the finals, and then [Final Draft vice president] Shelly Mellott actually called me to tell me that I had won the Sci-Fi category, which they refer to as a “finalist”, because the grand prize winner is the “Winner”, but I prefer to say “Sci-fi Winner”. Once it won, I got a lot of emails from people at management companies, saying: “Hey, could I hop on the phone to talk to you?”

So you were actively pursued?

Oh yeah. I didn’t query anybody…

Stay tuned for the continuation of Joseph Greenberg story, in the second installment of his interview, where he talks about assembling his representation team, lawyering up, and the pivotal moment when he sold his script.