Home > What Is Nonlinear Storytelling?

What Is Nonlinear Storytelling? 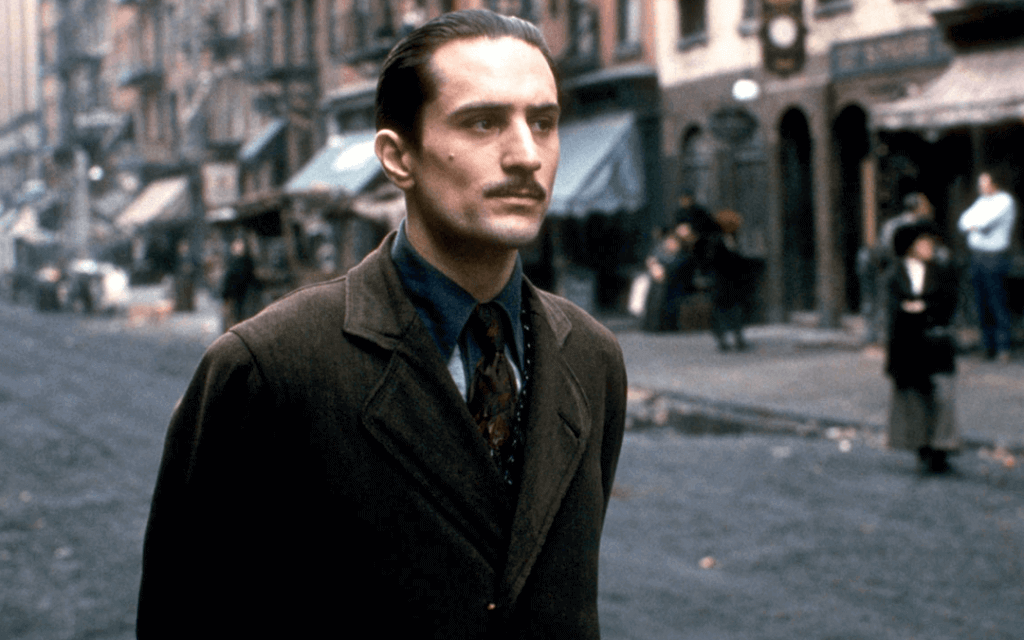 “A story should have a beginning, a middle and an end, but not necessarily in that order.” – Jean-Luc Godard

In my last article I discussed frame stories and isolated flashbacks. But what if there are several flashbacks in your story? What if we keep jumping from the past and present and it’s not a frame story? Meaning, we cut back and forth without a character directly telling a story or obviously reflecting back. Well, if this is the case, we’re no longer talking flashbacks.

Perhaps the most known, as well as most acclaimed, nonlinear film is The Godfather Part II.

Both a prequel and a sequel, The Godfather Part II tells two stories that run parallel throughout the film: One story details young Vito Corleone’s rise to power, the other focuses on Michael Corleone, Vito’s son, and his struggle to hold on to his power. These two storylines are a generation apart. Vito’s story cannot be considered a flashback because Vito himself is long dead in the other story and Michael hasn’t even been born for the majority of the storyline. The two stories are juxtaposed in such a fashion that we get a sense of dialogue between father and son. But this is a thematic interpretation not a literal one. Director Francis Ford Coppola and writer Mario Puzo constructed the story this way to contrast the similarities and differences between Vito and Michael. Whereas Vito is entering into a world of crime mainly to support and better his family, Michael is corrupted by the power he’s inherited and, ironically, destroys his own family. Initially, when Coppola showed a rough cut of the film to his peers, they all suggested he omit Vito’s storyline and make the film a more traditional sequel. Coppola stayed true to his artistic vision, and it resulted in one of the most powerful and thought-provoking films ever made.

The king of nonlinear filmmaking, however, is without doubt, Quentin Tarantino.

Unknown to many, his first script, True Romance, was, itself, nonlinear before director Tony Scott rearranged the story to be more traditional and chronological. In Tarantino’s original draft, the story begins with our young lovers, Clarence and Alabama, visiting Clarence’s ex-cop father, Clifford (in the film played by Dennis Hopper). They’re on the run and need to lay low. Clarence won’t go into the details, but obviously some heavy stuff went down. This is a very effective opener because it immediately creates intrigue and mystery.

What did Clarence and Alabama do? Who’s after them? The couple eventually hit the road and subsequently Clifford is visited by a gangster named Don Vincenzo Coccotti (in the film played by Christopher Walken). And this guy means business! Anyone who’s familiar with the film knows that the exchange between Clifford and Coccotti is one of the highlights of the film, and features some of Tarantino’s most colorful dialogue. Having this exchange early in the script not only creates more tension, it was a great way for Tarantino to demonstrate his gift for dialogue sooner rather than later. After this great scene, the story jumps back to the past. What is the first act of the film is the second act of the script. We then learn how Clarence and Alabama met, what she did for a living, what Clarence did to her employer, and why they’re on the run from gangsters. We then return to the present for the third act, which more or less, plays out like the film.

It took True Romance several years to get made, and by the time it did, Tarantino was already an established filmmaker. But don’t undervalue the importance of this script to his career. Like any good spec, it was his introduction to Hollywood. It was his first calling card, even if it was “behind the scenes”. And even if Tony Scott ended up making the film linear, Tarantino’s choice to go nonlinear in the spec made an impression on the industry.

I’ve heard from various people that I can’t get away with certain things in a script because I’m “not Tarantino”. I’m sure when Tarantino was an inspiring screenwriter working at that video store in the eighties, he was told he couldn’t get away with certain things because he wasn’t Coppola. If there’s any rule in the film business, it’s that the rules are always changing. Don’t limit yourself to what you think you can or can’t do. Just tell your story in the most effective way possible. That’s what Tarantino did and the man became an institution. His style is synonymous with nonlinear storytelling. If you sit down to watch one of his movies and there isn’t some creativity with the timeline, you might feel cheated.

Tarentino’s second spec, Natural Born Killers, likewise made an impression on the industry but wasn’t produced until after Tarantino’s breakout success with Reservoir Dogs. By the time Oliver Stone attached himself to Natural Born Killers, Tarantino was already moving ahead with Pulp Fiction and wasn’t interested in rewriting an old spec for another director. After Stone and his collaborators revised the script and shot the film, Tarantino famously disowned the project, receiving only a “Story By” credit. Interestingly enough, half of the film is taken from Tarantino’s original script, including full scenes and much of the dialogue. But what’s really interesting is that it’s not the half you would think. The True Romance-esque outlaw-couple-on-the-road-and-in-love section is Oliver Stone’s vision. The story about the media frenzy stirred by Mickey and Mallory, and the subsequent prison riot is Tarantino’s vision. In the original script, tabloid journalist Wayne Gale (played by Robert Downey Jr. in the film) is the main character. Essentially, the third act of the film is the entire script.

It’s Tarantino and not Stone who’s more interested in social commentary. His script is a dark satire about the media and how it exploits violent people and horrific acts for ratings. Of course, most of this is retained in the film as well (again largely in the third act). What Oliver Stone injects into the narrative is a psychedelic road film element in which Mickey and Mallory are treated as anti-heroes. And he uses practically every cinematic trick available: Flashbacks, flash-forwards, fantasy sequences, color filtering, sparse animation, inserted commercials and news clips, etc. As such, we can’t truly label it nonlinear. It’s more stream of consciousness. This is a literary style in which a character’s thoughts, feelings, and reactions are depicted in a continuous flow. Jean-Luc Godard applied this style to film in the 1960s. Oliver Stone, clearly influenced by Godard, took the same approach with his films in the 1990s. The Doors and Natural Born Killers are the two most extreme examples of Stone’s stream of conscious style, but JFK and Nixon likewise follow suit (albeit in a more restrained fashion). This is a style that’s also largely dependent on the post-production process and editing. Thus it falls under the craft of filmmaking rather than screenwriting.

Another well-known and acclaimed film that utilizes both nonlinear and stream of consciousness techniques is Woody Allen’s Annie Hall. Written by Allen and Marshall Brickman, the script told a more traditional story of a couple in New York with a comedic subplot involving a suspected murder (reused many years later for Manhattan Murder Mystery). It was in the editing room, however, that Allen discovered a different film. He found he was more interested in the couple’s relationship, and thus reimagined and refocused the entire story. The result is a film that periodically jumps from past to present, makes free use of fantasy sequences, and even has the protagonist break “the fourth wall” to offer commentary. It might’ve seemed radical in its day, but it swept the Oscars and solidified Allen’s stature as a filmmaker. That being said, a story that’s “discovered in the editing room” is not a story that’s feasibly written at the spec stage. It’s best to leave stream of consciousness to the auteurs, and simply focus on telling a crackerjack story.

To this end, Tarantino is the better artist from whom to take a cue. His films are largely discovered at the script stage, and not in post-production. He’s a writer foremost. His scripts, though nonlinear, are easy to follow and one can learn much about style and structure from them.

His scripts prove there are many ways to tell a story. And that rules were made to be broken.