Home > What “Eddie the Eagle” Writers Teach Us About Perseverance

What “Eddie the Eagle” Writers Teach Us About Perseverance 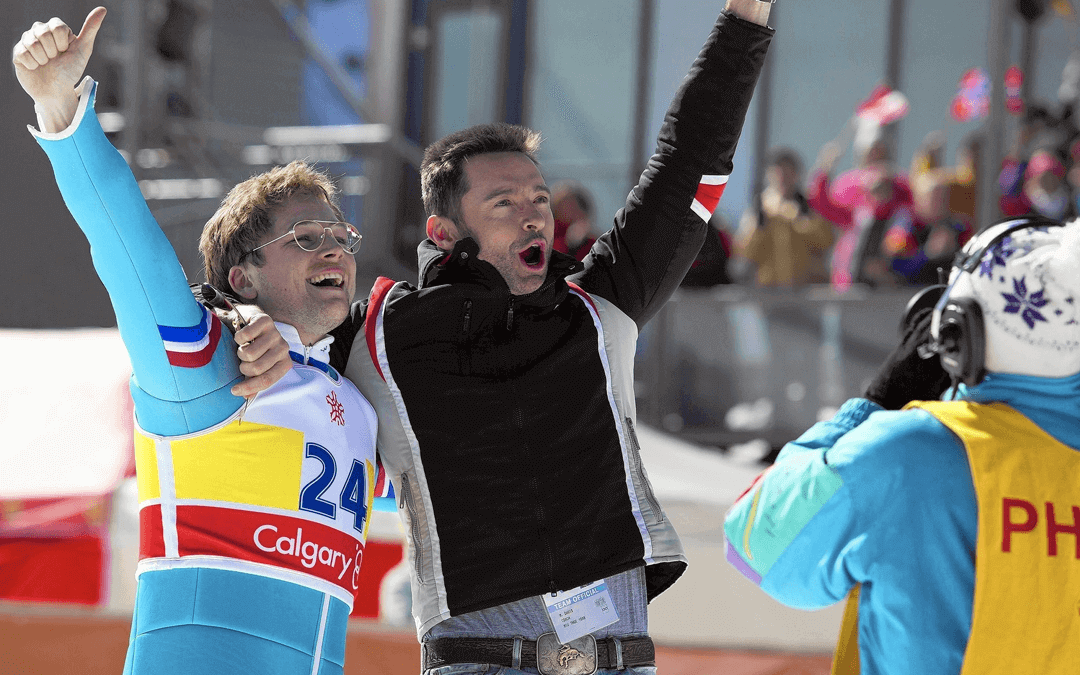 Eddie the Eagle, starring Taron Egerton and Hugh Jackman, will no doubt be added to the list of best films about athletic underdogs. The film is inspired by Michael Edwards, who earned the nickname “Eddie the Eagle” when he competed in the 1988 Winter Olympics in the ski jumping event on behalf of Great Britain. Though he placed last in the event, he inspired people around the world for his determination and love of the sport.

Multiple versions of the script Eddie the Eagle have been jumping around the UK and Hollywood for over two decades. Disney even considered making the film at one point, but instead made Cool Runnings, inspired by the Jamaican Bobsled team that also competed in the 1988 Winter Olympics.

Like many films that take a long time to reach an audience, Eddie the Eagle is the work of several writers. The project started with writer Simon Kelton, then a ski journalist working in the alps in 1988. He knew Eddie from the slopes and was inspired by Eddie’s iron will and fearless approach.

“The wondrous thing about Eddie was his just give it a go attitude. What he did that most people don’t understand is that he did his first 15-meter jump within an hour of starting [ski jumping]. He did the 40-meter jump on his second day. He was a great skier and he was only just outside the British downhill team. And then he did the 70-meter jump within about a month of beginning and that’s normally something that takes people about 15 years to graduate to, although he didn’t do too well. Most people start when they’re about five, growing up in Finland and Norway and all those places,” said Kelton.

But it wasn’t just Eddie’s quick ascent into the world of ski jumping that made him special. “One of the most interesting facts about Eddie is that he was caught in this difficult situation where he had to play up to the press and to his image. He did have some extraordinary things going on, his super thick glasses used to steam up under his goggles, so he couldn’t even see when he took off,” Kelton added.

Eddie was also challenged when it came to financing his ski career. From a working-class British family, Eddie had to pay for everything himself. “He always had to jump in terrible second-hand equipment. During one jump, the piece of string that was holding on his helmet that he had been given by the Italians snapped and the helmet bounced off into the trees. The jumping boots he borrowed were so old and the leather was so dry, one of the boots simply broke in half on the jump and the whole ski fell off his foot. He was both incredibly brave to be cobbling all this together in this amateurish way, but he was also aware of the fact that it made him a character and that meant people followed him which allowed him to earn a bit of money to keep going. He played up to his Inspector Clouseau image in a sense that people put on him.”

But it wasn’t just his equipment that caused challenges, said Kelton. “At one point, he lived in a Finnish mental asylum because that was the only room he could afford. He missed one big competition because he overslept in the cowshed he was in. It was shame we couldn’t have all of that in the movie, but for practical reasons, you end up shooting in one place and we couldn’t go zooming around and include all these mad adventures. For one period, he slept under a ping-pong table in a scouting house where he was mowing the lawns to pay for his accommodations. When you think of the resources our top athletes get these days, with their coaches and millions of dollars they get to compete, it’s kind of nice to see someone who did it all himself.”

Though Kelton put his all into the project, the script eventually transferred hands to Sean Macaulay. Macaulay managed to set up the project at Sony but it then got put into turnaround, which he described as a “mystery loss of momentum.”  In other words, the project was dead.

After that, British comedian Steve Coogan and his comedy team came on board and did a draft that was apparently closer to an Austin Powers-type film. While the draft was funny, it most likely didn’t get made because it strayed too far from Eddie’s real story.

Years later, Macaulay came back to the project and was able to keep some of Eddie’s natural humor in the story, but also add in a deeper, psychological aspect. “I discovered the real relationship between Eddie and the coach. It’s easy to coast along on previous sports movies, but you really have to dig into them as characters and how they help each other to grow. So that was the pivot there – just as Eddie has the potential to do it well, the coach sees that he can do this for real. That was the turn. People remember him as the guy who came last, but he actually became a very decent jumper,” said Macaulay.

So how close did the writers stay to Eddie’s real story in the end? “Eddie understood that at some point, the movie has to become it’s own thing, but as long as it was true to the spirit of his quest and there wasn’t a bunch of jokes about shagging German bar maids or something, then he was fine. He was weary he’d be made to look like a buffoon, but I think he understood that was never the movie’s intension. The monastic side of him, drinking milk and eating bananas, was really touching,” said Macaulay.

The movie finally gained momentum after producer, Matthew Vaughn, showed his kids the film Cool Runnings. They really responded to the unlikely heroes in the film  and Vaughn had a flashback to a script he’d read a decade prior – Eddie the Eagle.

Macaulay admits the events that followed were a bit eerie, even for Hollywood. “I woke up at four in the morning and I couldn’t understand why. I checked my email and there was this email that had come through, saying, ‘is this your email? Signed MV,’ so I had to figure out who MV was and I had literally just watched the trailer for Kingsman the night before. I replied to that email and a few hours later we were speaking. He wanted to know what ever happened to that script he’d read 10 years ago.”

If there’s anything to be learned from this project, it’s that a writer should never give up. “If you live in LA long enough, you get kind of mystical, karmic and spiritual,” said Macaulay who decided to turn the fate of the project over to the universe.

“I wrote a ‘f**k it’ draft, that really didn’t change that much – maybe 5%. I just wrote what I wanted in there and I felt proud about it.” Macaulay put that version of the script up on the Blacklist and ended up getting a manager. Sometimes, letting go of years of notes and opinions can make a screenplay stronger.

Despite taking so long to get made, Eddie the Eagle is as inspiring as it is entertaining with standout performances from Taron Egerton as Eddie, and Hugh Jackman as Coach Peary. We think it was well worth the wait.

Eddie the Eagle was written on multiple versions of Final Draft and opens in theaters Feb. 26th.