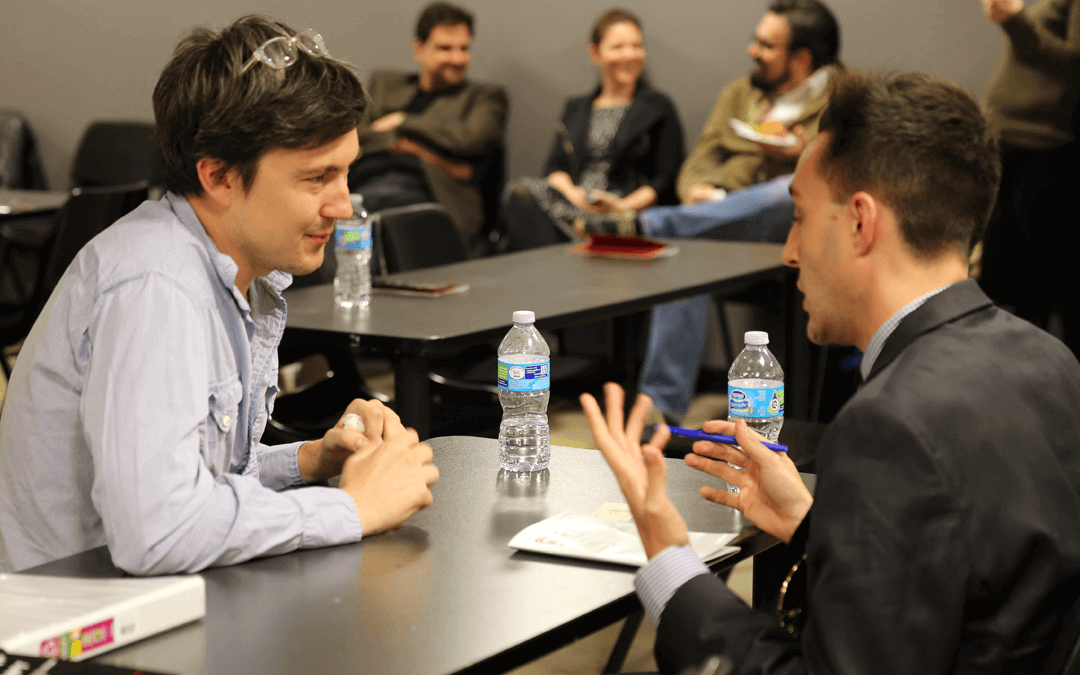 Being able to write a decent script is just half the job of a professional screenwriter. Usually after breaking in with a spec script, an agent or manager will send you on a bunch of general meetings with production companies.

Sometimes these meetings are just that: General.

It’s simply a way for people in development circles to get to know you. They like your writing, but do they like you as a person? Do you come across as professional? Are you quick-witted? These are the things they’re looking for.

And that’s really the key: Make them feel comfortable. Be cool.

The eventual goal of these meetings is to get work.

You accomplish this through pitching.

Most of the time a producer will pitch you a concept. If you run with their idea in the room and they like what you’re saying, they’ll ask for a take or a treatment.

Whether the idea originates from you or a producer, once the ball is rolling it leads to the same thing: You start developing an idea and pitching it at numerous stages. If things are going well, more and more people will get involved. You’ll climb up the ranks of the production company and eventually you’ll have to pitch it to a studio.

This is the final and most important step. It’s the step that can actually lead to getting paid if you ace the pitch. And the producers will expect you to do the pitching. They’ll tee you off, but it’s expected the writer does the selling in the room. A screenwriter who can’t pitch is like a band that can’t go on tour. It’s a necessary means of survival. You’re not a novelist. Cinema is a collaborative art form. Pitching is your initiation in a world filled with constant human interaction. If you’re not good in a room, you need to learn how to be.

If you follow the below five tips, you should be able to master the art of the pitch.

Some writers only have one story to tell. These writers will most likely not have a long career. Even if your spec script eventually sells, chances are it might take a while. Maybe even years.

Your spec is more a writing sample than anything else. The goal is to get work based off it. It’s best to have numerous ideas. They don’t need to be fully formed out of the gate, but by the time you pitch to the studio they do.

Initially your concept just needs a strong log-line or hook. Usually the ideas that are more character-driven are better saved for a spec. It’s the more-high concept stories that are ideal for pitching. Stay in the genre of the writing sample people have read or everyone will think you’re an amateur.

Also do your research. IMDB is a useful tool in this regard. Before meeting with a production company find out what films they’ve made or, even better, what films they currently have in development. This will tell you what kind of material they’re likely to respond to. Usually you shouldn’t pitch more than one or two ideas. If you bombard them with too much, it’ll be a washout. Keep it simple and focused.

One of the biggest mistakes an amateur pitcher makes is not keeping focused. They’ll digress. They’ll talk around the points that need the most discussing.

This is often the result of overthinking.

The thing people care most about is the following: What’s it about? That’s it.

What’s it about? If you can’t answer that question in one concise sentence, the idea is probably too complex to sell. Think of your pitch as a summary on the back of a book or DVD package. The more developed the pitch gets, the more creative you can get with the set up (generally setting a mood or tone requires a little more detail than the second half of the pitch). If you can think in terms of the three act structure, this will also makes things much easier.

You engage them with the first act and then make the second and third acts snappier.

Don’t rush though. It’s better to have less information and more personality. Just as long as the central ideal is clear, you can relax and have fun with it. Don’t get uptight. You’re just talking about this movie in your head the same way you’d be telling your friend about Jaws or Fast and Furious 7.

By the time you’re pitching to the studio, there won’t be too much room for improvisation. When you’re first pitching a producer, however, it’s important to be flexible and think on your feet. You shouldn’t bombard a producer with too many ideas, but it’s good to have at least one backup idea to pitch.

If a producer doesn’t seem interested in your initial idea, you should wrap it up and switch gears. As a writer you should be a good judge of human behavior. You should be an observer.

Well, observe the person or people you’re in a room with. Are they the type to get offended easy? Do they grasp things quickly? You shouldn’t be reciting your pitch in a vacuum. Modify it for your audience.

Place emphasis on the things you think they’ll respond to most. These are basic tactics in sales. You can’t be just a writer, you also have to be a salesperson. If the producer isn’t responding to any of your ideas, be straight forward:

Ask them what type of material they’re looking for. Keep a dialogue going. Be prepaid to improvise and spitball ideas. Most producers will give you an hour of their time. Try to get the most out of it.

Many writers by nature are introverted. Again, this is fine if you’re a novelist, but it’s a major hindrance if you’re a screenwriter. The film business is filled with big personalities: Agents, producers, studio execs, directors and actors.

This can be intimidating for a lot of screenwriters. They feel small, unimportant, etc. The screenwriters who often rise to the top have big personalities themselves. Just look at writers like Aaron Sorkin, Diablo Cody, Matthew Weiner and Kurt Sutter.

They’ve got one thing in common: a commanding presence.

They walk into a room and own it. They’re the star. They need to be. They’ve got a lot of competition. Many movie stars write screenplays these days. This isn’t the age of the typewriter. It’s the age of Final Draft. Screenwriting has been democratized. All you need is a computer. If you don’t come across as a confident person with a strong sense of yourself, it’ll be difficult to sell anyone anything. This doesn’t mean be cocky or full of yourself. Simply be an agreeable, cool person who owns it.

You belong in the room and among these people. Your talent has placed you there.

5.) Have A Clear and Strong Vision

Even though you should be collaborative and able to modify your pitch, you shouldn’t completely overhaul it in the room. It comes across as weak and sends the wrong message; it says you don’t have a clear and strong vision.

Producers and execs want you to have vision. That’s part of your job: To be the person with vision. Even if they don’t get behind your idea, they’ll respect you and will likely pitch one of their ideas to you.

The seed of an original idea comes from the writer. They know this and value this in development.

This is especially the case when pitching a television series. You have to sell people on a world that thus far only exists in your head. If it’s not concrete and it doesn’t have certain perimeters, no one’s going to share your vision.

The art of pitching is the art of communication.

If you can write it, you can pitch it.